You are here: TSMP Home 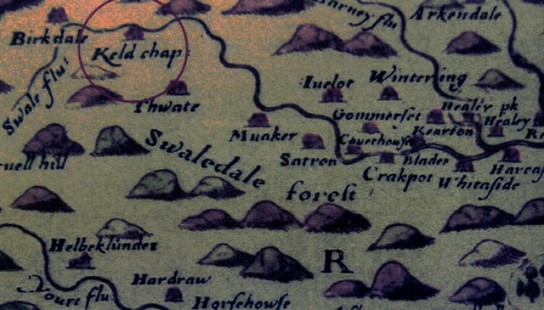 Part of Christopher Saxton's map of 1577

On the 6th of June 1561 Ralph Alderson left in his will twelve pence for the priest at Keld to pray for his soul. The Reformation was in full swing, Mary Queen of Scots was denied entry to England and the first Calvinists sought refuge in this country. Before that we do not know how long there had been a church building or priest at Keld. “Keld Chap” features in a map of Yorkshire by Christopher Saxton in 1577 and again in map drawn by John Speede in 1610. A map of 1646 show “Keld Chu” and “Birkdale Chap” further up the dale. In 1696 there is an invoice for 5 shillings and ten pence for walling up the chapel door. By 1722 “Keld Chapelle” had no roof and slate and timber had been stolen. 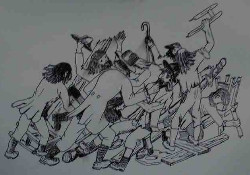 There is an account that at some unknown date a riot within the chapel raged with such severity that the chapel was ruined. The story goes that during a service a stranger came in and shouted out loud that he would give anyone tuppence to help him buy a calf. He could not be persuaded to keep quiet and a fight broke out. Others from outside came and joined in and the stranger took the opportunity to slip away unnoticed and was never seen again.

What has no whiff of legend about it is that in 1789 a Mr Edward Stillman, an itinerant preacher, visited Muker and Keld. He stood in the centre of the ruined chapel that was overrun with weeds, planted his stick in the ground and declared ‘Here will I have my Chapel and here will I preach the Gospel.’ He built a modest chapel with two adjoining rooms, one was a school where his wife was the teacher and the other his home. In 1818 he rebuilt the chapel and manse and purchased adjoining land for a burial ground. He soldiered on with failing health after the death of his wife in 1830 and he died on 22nd of March 1837, 48 years after vowing to build a chapel and preach the Gospel in Keld.

Published in Our Church
More in this category: « About Keld Chapel Our Minister »
back to top

Design and Hosting by Dave Sage.